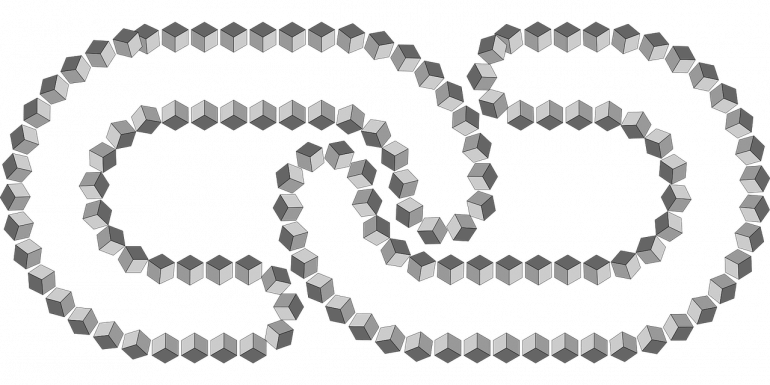 Since about the year 2000 there’s been an array of buzzwords and catchphrases used in the technology industry in order to raise money from people for the purpose of investing into their startup. “The Cloud”, “Disrupt” (as long as it doesn’t affect the Old Guard), “Web 2.0”, and most recently, “Blockchain”, have all been used to secure funding and make others around you feel like you all know what you’re talking about. So what is a blockchain? Why would someone need it? Can you have “blockchain” without “Bitcoin”? Is it really this magical one-stop shop solution that is going to save your startup from failing? You might be able to secure some money from gullible investors, but it isn’t going to propel you any further ahead than if you used a traditional database.

In computer science, a linked list is a linear collection of data elements, whose order is not given by their physical placement in memory. Instead, each element points to the next. It is a data structure consisting of a collection of nodes which together represent a sequence.
Wikipedia

Replace the above quote’s “linked list” with “blockchain” and you’ve nailed 90% of what a blockchain is. The remaining 10% are some special characteristics that puts the word “chain” in “blockchain”. Blocks consist of (rudimentarily) a header and the body data. The header that’s stored in the individual blocks reference the block immediately behind it, and is tied together using hashes.  In this manner a hash is used to secure the order in which the blocks are set, which is important because the body data of the block contains all of the transactions from the different addresses. It would pose a problem if blocks were not in order because the transactions wouldn’t be in the correct place for when the value was transferred. If some nefarious individual were to try to change a block from the past, perhaps to try to steal coins from another address, it would change the hashes of every single block after that affected block, thereby breaking the chain. The attacker would tell his node that his hacked blockchain is the correct one, which is all well and good for him, but he then needs to convince the rest of the bitcoin network – and that will not work. They ignore his chain. So what is a blockchain? It’s a data structure which locks nodes in a particular order. While normal linked lists can be modified in the middle of the chain, a blockchain’s data is secured by the network of self-governing bitcoin nodes and the hashes found in the header of each individual block.

An individual or company might want a blockchain if and only if there’s two cases they’re trying to achieve. The first is if they’re worried about the integrity of the data they’re storing. The second and most important is if they’re exposing that data to a network of individuals that may have the ability to modify or add to that data. A blockchain ensures that everyone in the network is working on the same dataset and is desired to preserve decentralization of the data. Instead of having a central server which can be taken down by state actors one would decentralize by using a blockchain to prevent that from happening. The Pirate Bay is a  great use-case example of a centralized service that has changed their business model and became decentralized. I won’t detail it out here but you can read more about what it means for them to be decentralized here.

Pundits in the FinTech sphere dislike the word Bitcoin but love the word Blockchain. It’s the next big thing, according to them. To have a blockchain but without some sort of financial-incentivized token behind it makes for an inefficient database that would be better served as a centralized MySQL database. Services these individuals are trying to build could very well be suited for a blockchain, but to try to reinvent the wheel, especially a wheel that’s been around since 2009 and has better security than almost all Fortune 500 companies is not only shortsighted but a clear money grab attempt. Nobody will voluntarily waste electricity to help you secure your over-engineered blockchain without some sort of reward, which in the case of Bitcoin are the bitcoins themselves.